The State of California Investor Relations page recently published the bond offering summary that describes Morgan Stanley and Wells Fargo as the joint senior managers on the $2.1 billion general-obligation bond deal on Sept. 14.

“The future fiscal impact of stresses to the energy grid caused by climate is difficult to predict, but could be significant,” the state said. “In recent years, California has taken on numerous steps to increase resiliency to be better prepared to meet the state’s electricity demands.”

The warning comes as the state is greenifying its power grid system by ditching diesel and natural gas generation sources for wind and solar. Simultaneously, lawmakers in the state are incentivizing residents to purchase electric vehicles that require an enormous amount of energy. It’s a straightforward equation to understand. The more EVs on the road, the larger output the grid needs to produce or risk collapse. 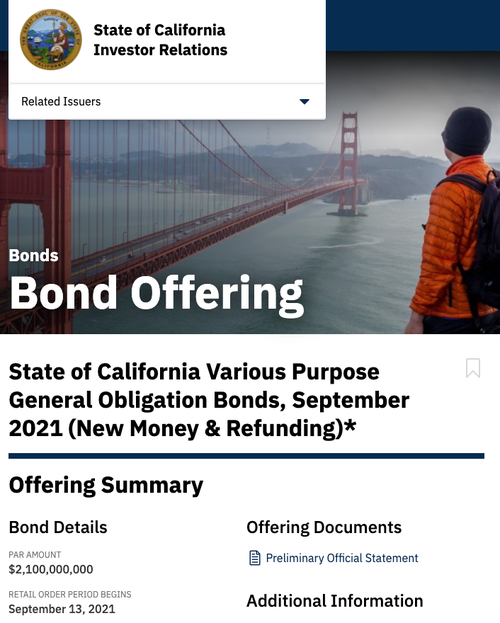 California’s plans to become an environmental and socialist utopia face the harsh reality that climate volatility and green energy sources may not be as reliable as once thought.

Texas found out the hard way when its wind-power generating capacity went offline because a massive deep freeze across the state in February contributed to the entire grid meltdown.

So far, liberal politicians who are chasing renewable energy as a means of mitigating “climate change” will have to soon wake up to the fact that renewable energy sometimes is unreliable energy. It would be challenging for California to upgrade its grid to accommodate zero-emissions vehicles on its highways by 2035 unless the grid was completely overhauled.

The latest example of fragile grids is Hurricane Ida destroying two thousand miles of transmission lines and knocking out power for nearly a million people in Louisiana that may not even fully be restored by the end of next week.

The consequence of unreliable grids and politicians increasing EV demand is a recipe for an unreliable grid.
Readers may recall that it cost Tesla users $900 per charge during the Texas cold snap in February.

No comments to show.